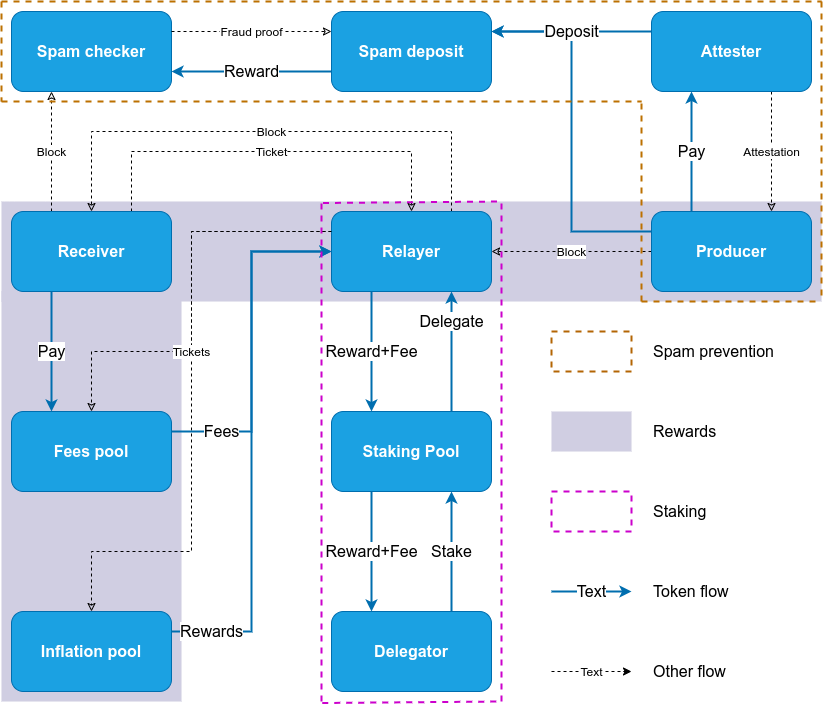 POND is a standard ERC-20 token contract with a total supply of 10 billion.

Conversely, POND also functions as the deterrent for ensuring that nodes perform up to pre-set performance standards. The Marlin network would generally require nodes to first put up a stake of POND before being entitled to participate in the ecosystem, and failure to meet performance standards would result in deduction of such stake.

POND may delegated to relayers and subject to slashing penalties if the relayer its delegated to doesn't follow the protocol.

Users of the Marlin network and/or holders of POND which did not actively participate will not receive any POND incentives. POND are designed to be consumed/utilised, and that is the goal of the POND token distribution. In fact, the project to develop the Marlin network would fail if all POND holders simply held onto their POND and did nothing with it.

MPOND is Marlin's governance and staking token. It can used to create and vote on proposals. It is also required to run a Marlin node - every Marlin node requires a certain amount of MPOND staked or delegated.

A bridge contract is used to convert between MPOND and POND. 1 MPOND can exchanged for 1 million POND tokens and vice-versa via the bridge.

POND can be converted to MPOND by sending POND to the bridge and an equivalent number of MPOND (#POND/1m) is received on the same address while burning the POND tokens sent.

The bridge also allows conversion of MPOND to an equivalent number of POND (#POND X 1m). However, the conversion is a bit nuanced and not instantaneous as above. The mechanism is described below.

A request can be made on the bridge to convert a certain number of MPOND (say P). After transfer request is made, there is a wait time of W blocks before a conversion can be attempted. During the wait time, MPOND can still be used towards staking and governance. After the wait time, a fraction L of P MPOND can be sent to the bridge for conversion.

Parameters W and L are both controlled by governance. These parameters make sure that there are always enough MPOND locked to ensure that the security of the network and its governance is not compromised. After every W blocks, of P MPOND requested initially can be sent to the bridge for conversion. That is, if W and remain constant, the user can convert all the requested MPOND to POND in blocks.

A series of scenarios and expected results of calls made to the Bridge are illustrated in the table below.

You acknowledge and agree that there are numerous risks associated with purchasing MPOND/POND, holding MPOND/POND, and using MPOND/POND for participation in the Marlin network. In the worst scenario, this could lead to the loss of all or part of the MPOND/POND which had been purchased. IF YOU DECIDE TO PURCHASE MPOND/POND, YOU EXPRESSLY ACKNOWLEDGE, ACCEPT AND ASSUME THE FOLLOWING RISKS: